- January 11, 2009
During SAP TechEd08 I really got enthusiastic on SAP NetWeaver BPM, formerly known as Galaxy and in 2008 again branded as Galaxy. Especially the integration of the Business Rules engine made me want to try this at home. Personally I feel that BRM is not optional within BPM, it is not a feature, it belongs to the total concept of process orchestration. Without it, BPM is not complete.
So I built a BPM demo for the TopForce Learning Day. A recap of this demo can be found in my SDN blog Easy process implementation with SAP NetWeaver BPM. A simple process but effective enough to show the power of the concept.

I updated this process to implement BRM:

Now I want to implement a business rule with BRM. But unfortunately I can’t get this to work. What I want to do is extend the process with a mapping step in which the rule get called. Within this rule the expense amount gets checked: Under €25 the expense gets validated automatically and above that the manager needs to approve or reject. In BRM this looks like: 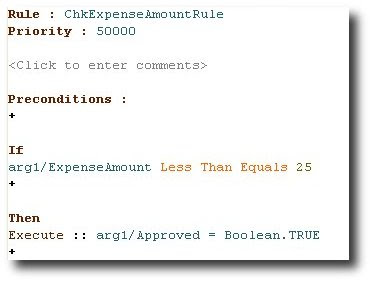 On base of a tip given by Arti from SAP on my forum question: Integration of BRM within BPM doesn’t work, I even created a new context in stead of re-using the Web Dynpro context:

Creating a new context is a bit strange, re-using is better/easier. But anyway I tried as I can no longer think of any other options myself.

Unfortunately I can’t get it to work. The process will start but the rule does not behave as expected. Every expense statement gets rejected.

The one thing that is different compared to what I heard during TechEd08 and what I read on SDN, is that I implemented the rule directly in BPM. I did not create a stand alone BRM application that contains the rules and gets called via Java code in a Web Dynpro application. Maybe it will work that way, but that is not how the targeted users of BRM want to implement business rules. They, the BPX-ers, don’t read or write Java code. They orchestrate the business process and rules should be directly implemented while modeling the process.

Who has the answer or solution? I personally think that the integration of BRM within SAP NetWeaver BPM is not finished completely.
BPM bpx BRM

Hiking the Grossvenediger with The Next View

- September 13, 2014
In 2014 The Next View celebrates its 5th anniversary. And we did that in style. We all took off to Austria and hiked the Grossvenediger, top 4 of highest mountains in Austria. Hiking route The first day we hiked in pretty good weather conditions to Defreggerhaus. The second day, the hike to the actual summit (The Next Summit ;-) we woke up early and found out that snow covered our route. But that didn't undermine our spirit. We took off and had a great hike. We almost made it to the top, but unfortunately weather conditions (snow and wind) worsened and with the sign in sight we had to return. Look very close, you can see a grey cross somewhere in the top left corner ;-) Back to a safer spot to take our group picture. With Schnapps of course ;-) What an amazing experience. Hiking a 3666 meter high mountain was something completely new for me. Doing that with colleagues was really awesome! More pictures in my Grossvenediger album .
Read more