SAP TechEd 2013, the best and strangest experience ever

Together with 10 colleagues I visited SAP TechEd in November 2013. (Missing on the pic: Leo van Hengel and Wim Snoep, who attended one day due to busy customer schedule) Team CloudSitter won the SAP InnoJam on Monday with an app that monitors new born baby’s on their wellbeing. Premature babies have an higher risk on Sudden Infant Death Syndrome, that’s why we came up with a sensor that tracks heartbeat, temperature and breathing. Information is stored in a central database in which thresholds can be validated. If there is reason to warn, the mobile app sends an alarm and changes color. Time to check upon your child. Winning InnoJam meant that we could also participate in DemoJam, the ultimate stage for an SAP NetWeaver professional. And guess what - we won!! Something new to SAP events as never before a team was able to win both InnoJam and DemoJam. Matt again, this time on DemoJam stage together with Andreas Profitlich.


So how to top that? No idea, this makes it best SAP TechEd experience ever.

While normally I attend SAP TechEd to gather as much as possible new information and hands-on experience, this year I got hooked up into several other kind of activities. Final preparations for DemoJam on Tuesday.


An interview on Wednesday about me attending SAP TechEd.

Getting some makeup, answering questions twice or three times, some shots at showfloor, some shots in the center of Amsterdam, ... and after a few hours hard work - a real movie with me ;-)

Interview on Wednesday of Dutch SAP Mentors by @Amsterdamsel 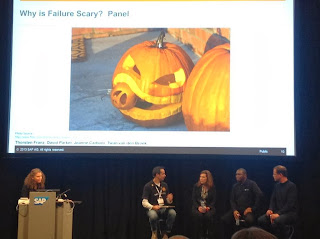 
Winning InnoJam and later DemoJam, being interviewed - it was a surreal experience and by that the strangest SAP TechEd ever.

June 05, 2014
This week the SAPPHIRENOW event takes place in Orlando, a yearly event where SAP announces its strategy and new products. On Tuesday Bill McDermott, the CEO from SAP, did some major announcements . All with regard to making SAP simpler. In this blog I will describe the license changes for SAP Fiori and SAP Screen Personas. These new UI innovations are now part of SAP’s maintenance fee. SAPPHIRENOW keynote
23 comments
Read more